Back by popular demand, our second “Evening with the Handicapper.”

After the success of our first “evening with the handicapper” event back in 2012, we were delighted the second event was just as well received and informative. Europe’s Chief Handicapper Dominic Gardner-Hill gave a fascinating insight into the world of handicapping to 75 Heart of the South Racing owners and their guests.

A keen racing enthusiast from a young age, he obviously lives and breaths handicapping and it was a pleasure to listen to someone so passionate about their profession. And who wouldn’t be considering they were responsible for giving arguably the worlds best ever racehorse- Frankel – his rating of 140.

He also talked about new developments in the pipeline when it comes to race planning and handicapping, some of which sound brilliant and will help trainers place our horses a great deal. For example, 76 rated horses will soon be able to run in 0-75 handicaps, carrying a 1lb overweight?

Channel 4 Racing presenter Simon Holt chaired the event and guests were able to submit questions in advance about ratings of specific horses and handicapping in general. The discussion raised many  questions and guests went home with a new found respect for the UK’s team of handicappers, whose job of “being fair to everyone” is far from straightforward.

The event was held at Cisswood House Hotel next door to Gary Moore’s Cisswood Stables which were specially opened during the evening so that visiting owners were also able to see their horses.

Proceeds from the event went to Simon and Dominic’s chosen charities, Moorcroft Racehorse Sanctuary and Sussex Air Ambulance and we are already in talks to hold a similar event in the future, with the addition of Stewards and officials from the BHA. Thank you to all owners who attended, and an extended thank you to Dominic and Simon for giving up their valuable time. 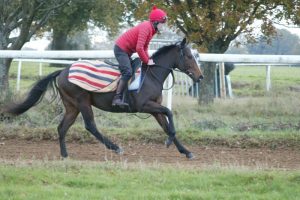 Available now in 2-year-olds plus a proven older horse.
END_OF_DOCUMENT_TOKEN_TO_BE_REPLACED

ISAYALITTLEPRAYER races in the last at @LingfieldPark jumpers bumpers fixture today. Great for the track to be offering this card after losing their turf fixture & we are hoping our filly’s flat speed will be an advantage in this type of race.Good luck to Owners & her lad Aidan🤞🏼 pic.twitter.com/4HC9…

When you’re trying to enjoy your Sunday breakfast but dear old Dominic has others ideas...! 🤣💙 pic.twitter.com/5xkE…

WALK IN THE WILD (near side) enjoying a pop over the hurdles on the grass & schooling smartly. He’s certainly coming together at home & we look forward to his hurdling debut within the next week if this ground improves🤞🏼🏇🏽@OliverSherwood pic.twitter.com/8lxk…

CILAOS GLACÉ will be our first runner of 2021 over fences today at @LeicesterRaces. He ran brilliantly last time out to finish 2nd & hopefully he can build on that today. @brendanp1995 will ride & best of luck to his Owners, the team & his groom Gracie. Come home safe Booty 💙 pic.twitter.com/Olbb…

RUBY YEATS showing her loving side as she poses for the camera post exercise with apprentice jockey @Anna_Gibson2. There are some interesting options coming up for this mare in the latter half of January 🤞🏼 pic.twitter.com/wiww…