Dragons Voice is a 6-time winner in training with Group 1 winning trainer David Menuisier. His most recent win came when stepping up in trip and relishing the softer conditions at Windsor in June 2019!

Dragons Voice was previously trained by Philip Hide who leaves no stone unturned when it comes to preparing his young horses and full credit must go to him for all of the work and preparation he has done with Dragons Voice, in particular his stalls work which has enabled this horse to be quick away and secure a handy position in his races.

Dragons Voice gave a fantastically consistent season in 2017 with 5 spots in the frame (3 of which were wins) and followed this up with an exciting 2018 campaign for his Owners. He scored his 4th win at Kempton Park on 23rd May before waiting for the ground conditions to be in his favour and returning to the turf on 1st September 2018 where he made his debut for the Menuisier yard and scored a comfortable fifth win!

After two disappointing starts in 2019, David was certain that a step up in trip was what Dragons Voice was crying out for, especially based on his homework and breeding. He stepped up to 1m3f at Windsor on 10th June and with the soft ground under his feet Dragons Voice proved David right and went onto score his 6th career win comfortably! He followed this up with a 2nd just 8 days post his win before finishing 4th when stepping up in trip to 1m6f and again when meeting class 2 company. In terms of ratings and quality 2019 was Dragons Voice’s best season ever!

Things have not really gone to plan for Dragons Voice during his first two starts in 2020 and although he showed a glimmer of hope at Hamilton this season, he is showing more signs on the track that he is just not enjoying his racing anymore. With a heavy heart his Owners have decided to retire him and we are delighted to confirm he has found a forever home where he will be spoilt rotten and enjoy being a riding horse with some low level competing. He really will be sorely missed! 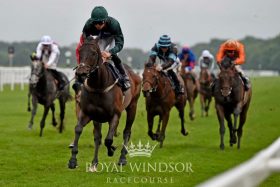 A step up in trip sees Dragons Voice win again! 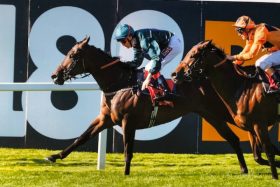 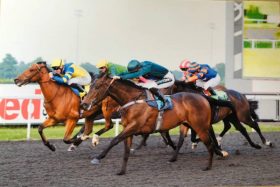 Dragons on fire as he scores his fourth win!

A gutsy success from both horse and rider Harry Bentley, May 2018
Read More 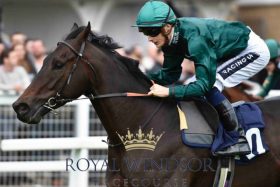 A brave third victory of the season, October 2017
Read More 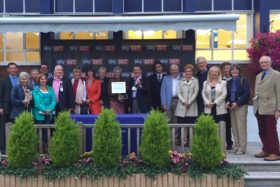 A touch of class on Dragons Voice’s second win

A cosy win for this progressive 3yo at Windsor, July 2017
Read More 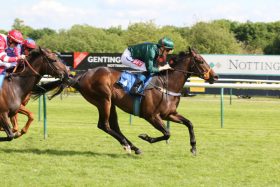 Poet’s Voice by Dubawi (out of a £3million mare.)

Top class Poet’s Voice won four races which included a 10 length victory on just his second start and a Group 2 at Doncaster as a 2-year old. Over a mile at 3, he won the Group 2 Celebration Mile and the Group 1 Queen Elizabeth II Stakes at Ascot. He was rated as high as 122 during his racing career. As a sire Poet’s Voice is the leading second-season sire and he is responsable for Group 3 Oh So Sharp Stakes winner Poet’s Vanity and Group 3 Italian 2000 Guineas winner Like Dubawi.

Dubawi won the National Stakes, Irish 2,000 Gunieas & the Jacques le Marois. He is rapidly becoming one of the world’s finest stallions and is the sire of no less then 21 Group 1 winners! The average price of his offspring is currently £647,000 – the best in the world – and include Makfi, Al Kazeem, Monterosso, Night of Thunder and Postponed.

China is an older yet decent mare who has produced 6 winners from 6 runners, in the UK and Italy, including 96 rated Cutter, 4-tme winner Catai (winner of 4 races) and Piquante (winner of 3 races.) All kept racing until 4,5 or 6 years old.

The Grand dam, Group 3 winner One Way Street, is an impressive black type producing mare. Her offspring include group winners such as Grape Tree Road, Windsor Castle and Red Route.

Congratulations team @gl_racing, lass Suzy & @joshmoore91 🏆🏆 Great to see Botox back with a great round of jumping - future looks bright for him 🤞🏼 twitter.com/itvracin…

Fantastic to have been given the opportunity to sponsor the card at @FontwellPark today & congratulations to all the winning connections 🏆 Wasn’t to be for our Waikiki Waves this afternoon but pleased that he’s home safe & confident he’ll be winning again soon 🤞🏼 pic.twitter.com/2nRq…

Two runners & we will be sponsoring the card at @FontwellPark today!🤩 Delighted to have WAIKIKI WAVES lining up in the race he won in 2019 & WALK IN THE WILD set to make his debut in 4.45 bumper at @HerefordRaces if rain arrives. Good luck to all- enjoy & come home safe boys💙 pic.twitter.com/MJAl…

We love a schooling morning! 🏇🏽 Here is ISAYALITTLEPRAYER enjoying a pop over hurdles under @elysia_vaughan & getting a grip of things quite easily. Looking forward to the winter ahead with her 🤞🏼🤩 @gl_racing pic.twitter.com/b6fJ…