Over the years this horse has proved to be one of our most consistent horses in training and he is described as “the perfect syndicate horse” by his trainer. Since 2012 Good Luck Charm has developed some pretty impressive statistics and has managed to win at least one race a year – usually at his favourite track Brighton! See all of his victories below.

The horse has won 9 times over 7f-1m and has been placed on 28 occasions. He has taken his Owners to wonderful tracks such as Goodwood, Newmarket, Ascot and Newbury and has provided many memories that will last a lifetime (his win in 2019 was a real special one!)

At the grand age of 11, Good Luck Charm is back in training with Gary Moore for one final season and we are thrilled that he continues to have a real zest for life and enthusiasm towards his racing. His welfare is paramount and should he suddenly fall out of love with racing then he will be retired immediately. However at the moment Good Luck Charm shows he just isn’t ready for retirement yet! This was proved when he finished 2nd at Lingfield Park in August – he almost looked like the winner! 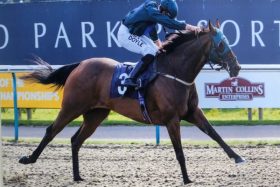 10yo Good Luck Charm flies home for his ninth win 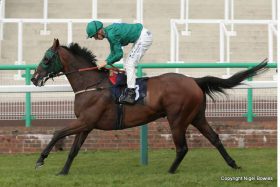 Good Luck Charm strikes for the 6th time at Brighton

Another win at Brighton for this 9yo, August 2018
Read More 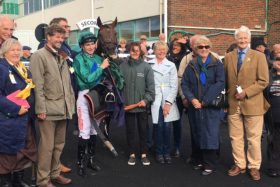 His second win in the space of a month, September 2017
Read More 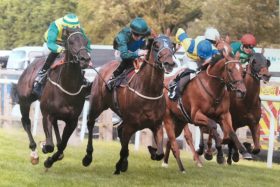 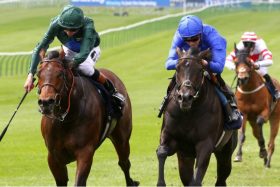 Why sell a winner? Read about our improving older horses

Most of our success so far this year has come from our older horses in training. Why sell a winner
Read More 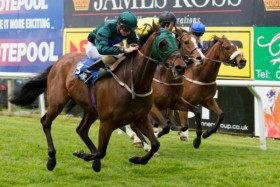 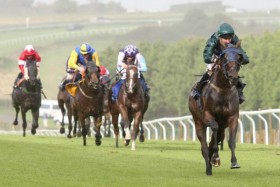 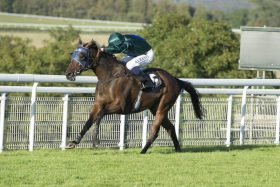 A great performance at Goodwood Racecourse in September 2014.
Read More 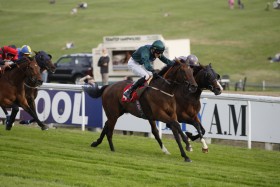 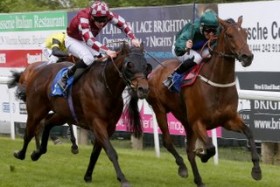 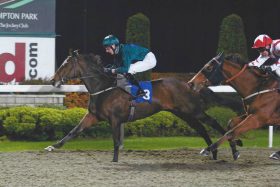 After a consistent season this horse gets his head in front, Nov 2012
Read More

Doyen was a top class multi Group winner, including the King George where he smashed Ascot’s 21 year old 12 furlong record by the equivalent of two lengths (until Harbinger in 2010!) Doyen was the record breaking Horse of the Year in 2004 and was rated 132 by Timeform. He stands at the world famous Darley and they personally recommended we put our Dam Lucky Dice to Doyen as this results in offspring being 48% Sadler’s Wells, as the Dam Fairy Bridge appears on both side of the pedigree. Doyen has had some successful seasons as a Sire and to date has produced over 92 winners, interestingly most of them middle distances types or jumpers.

Lucky Dice is Heart of the South Racing’s own broodmare and she has produced five previous foals – three of which are winners but Good Luck Charm is her most powerful and successful to date. Lucky Dice herself was a winner of four races in Norway over 1 mile or less.

This is a 20-owner syndicate allowing owners maximum involvement with their horse and trainer but still sharing the costs. There is one complimentary Owners & Trainers Badges every time the horse runs and Owners and their guests are welcome to visit their horse on the gallops whenever they wish.

Thank you for looking after him @bulchinsfarm Looking forward to seeing both these boys back racing next year 🤞🏼🤞🏼 twitter.com/bulchins…

Our 2yo for 2021 with @gl_racing! Here he is enjoying a day out to Cisswood Stables under @ClutterbuckRhys. He will arrive for full training with Gary in January. Get involved today - don't miss our Black Friday offer! More information on our website. youtube.com/watch?v=…

⚠️BLACK FRIDAY OFFER!!⚠️ Join this fun syndicate with Heart of the South Racing & @gl_racing before the end of Lockdown 2.0 & receive £200 OFF your share price❗️ Further information on this exciting 2yo for 2021 here - hotsr.co.uk/our-hors… pic.twitter.com/Y9aN…