3yo Lady De Vega is a convincing winner over 10 furlongs who looks open to improvement! She is in training with top Newmarket trainer Marco Botti and looks to be a fun filly for the season ahead.

Lope De Vega was a 4-time winner, including the Group 1 French Derby and the Group 1 French 2000 Guineas. He is one of the world’s leading Stallions and is responsible for the likes of 2000 Irish Guineas winner Phoenix Of Spain, 2-time Group 1 winner Zabeel Prince and Group 1 Lockinge Stakes winner Belardo.

The Dam Red Boots was placed twice and has produced 3 winners from 4 foals of racing age. What Marco really likes about the Dam’s pedigree is the fact she is by Verglas (which is believed to work well when crossed with Lope De Vega.)

Lady De Vega made her racecourse debut in February 2020 and despite being slow to stride and racing green she finished her race well. She followed this up with an encouraging run at Chelmsford in March where she stayed on nicely, making up ground in the closing stages and finishing 4th against some smart fillies.

The filly made her handicap debut at Leicester on 26th June 2020 which was also her first time on the grass and despite being a little green early on and stumbling 3f from home, once the gap became available Lady De Vega picked up strongly under Stefano Cherchi and won with a little in hand. Congratulations to her connections! It is fantastic to see things all come together for this filly and we are excited for her next start already! 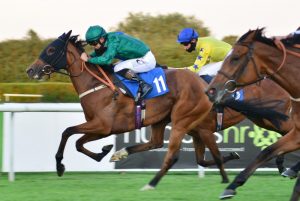 Lope De Vega was a high class 2-year old who won four races throughout his career including two Group 1 wins and numerous places. He has proved to be an excellent Sire and has sired many Black Type horses including Group 1 winners Newspaperofrecord, Vega Magic, The Right Man and Zabeel Prince.

He also sired Marco’s Capla Temptress who won 3 races throughout her career with her biggest achievement being the Grade 1 Natalma Stakes in Canada at the back end of her 2-year old season. At the age of 3 she finished a close 2nd in a Grade 2 in America.

Red Boots race 7 times throughout her career and was placed on two occasions over 7f-1m. Her offspring include 2-time mile winner Red Elysees, progressive winner Oi The Clubbs Oi’s and 5f specialist Stocking.

Her Sire Verglas (a combination which is said to work well with Lope De Vega) won the Group 3 Coventry Stakes at Royal Ascot impressively and was renowned for being a sharp 2-year old. He has gone onto produce some advanced types such as Group 1 winner The Monarch and French 2000 Guineas winner Silver Frost

This is a 10-owner syndicate allowing owners maximum involvement with their horse and trainer but sharing the costs and most importantly the fun. Prices are inclusive of all fees and costs, there is nothing extra to pay during the agreement. Statements detailing the syndicates finances are sent every quarter and all VAT is reclaimed on behalf of the owners.

There are two complimentary Owners & Trainer Badges every time the horse runs and Owners and their guests are welcome to visit their horse on the gallops whenever they wish. Owners will also enjoy a naming morning to decide on this filly’s racing name. All shares have been sold.
To learn more about our other horses, please contact us

We start a new week with a trip to @WindsorRaces this evening as LADY DE VEGA races in the 7.45pm contest. The filly won smartly last time out at Leicester & hopefully she can run an encouraging race this evening when stepped up in grade. Good luck to her connections 🏇🏽 pic.twitter.com/WgI7…

Ad in today’s @RacingPost on our 2yo with @DavidMenuisier. Since racings return in June David has enjoyed 3 winners & a few placed efforts & he’ll be hoping to add to that tally with his flurry of runners this weekend- good luck team! Get involved with this exciting trainer!🏇🏽 pic.twitter.com/oTXl…

Conformation is everything with horses and our Pivotal 2yo ticks plenty of boxes on that front! Why not join us on the gallops & see for yourselves? youtube.com/watch?v=…

2yo #HOTSTREAK winner at @BathRacecourse today. Excited to see our colt by this stallion on the track next year twitter.com/AtTheRac…

#THROWBACKTHURSDAY Ex-racer MASTER POET who is looking exceedingly well in his new home. He‘s been learning his new trade of showjumping & will do some low level showing alongside this.Thank you Maddy for giving him the best home, amazing to see him enjoying life after racing💙 pic.twitter.com/CpKe…