Quloob is one of our most consistent horses who won over hurdles in August 2020 and ran creditably at Royal Ascot and Glorious Goodwood. He is in training with Gary Moore, based in West Sussex.

Quloob was recommended to HOTSR after winning 3 consecutive races over 10-12 furlongs, as well as being placed in Class 3 company on the flat. He made his debut for us at Ascot in July 2019 and finished in the winners enclosure – and he has continued to do so pretty much ever since! He was an unlucky 3rd at Salisbury when having a lot of ground to make up and did not disgraced himself during his first two starts over hurdles (the form of which are holding up!)

Quloob kicked off 2020 by representing us at Royal Ascot in the Ascot Stakes and ran well for a long way but didn’t quite see the 2m4f trip out. He still ran with huge credit likewise when dropping back to 1m6f at Glorious Goodwood before finishing 2nd at Newmarket behind progressive Coltrane. He returned to hurdles at Fontwell Park on 28th August 2020 and jumped beautifully under Josh Moore, really making use of his flat speed as he pulled clear to win his first race over hurdles on just his 3rd time of asking.

He has had 12 races for Gary Moore and finished in the prize money during 9 of them and whilst he was on the sidelines in 2021 following a setback, he is now back in ridden work as he prepares for racing action in Spring 2022! Gary expects there to be more to come from Quloob. 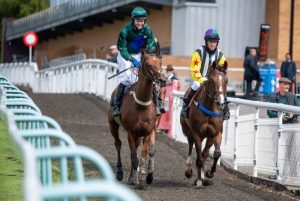 First win over hurdles for Quloob

New Approach was never out of the winners enclosure throughout his career. He won 5 races on the bounce including the Group 1 Darley Dewhurst Stakes at Newmarket at the age of 2. As a 3-year old he finished 2nd by a nose in the Group 1 2000 Guineas before he was stepped up in trip and won the Group 1 Epsom Derby. He ended his career with a win in the Group 1 Emirates Airline Champion Stakes by an impressive 6 lengths.

New Approach has a 41% winners to runners strike rate over jumps and is responsible for the likes of 4-time winners Jaleo, and Stepney Causeway.

Jadhwah raced once at the age of 2 over a mile before retiring to stud. She produced 5 foals, 4 of which are runners and all of which have been winners.

Her Sire Nayef is a top class 10-12f horse. He won the Group 1 Prince Of Wales Stakes at Royal Ascot and the Group 1 Juddmonte International Stakes. The Dam Dhelaal is responsible for Group 1 2000 Guineas winning Stallion Makfi.