9yo Waikiki Waves is a consistent horse over both hurdles and fences who has achieved 8 wins (his most recent at Lingfield Park in December 2021) and has ran some respectable races in Class 3 company. He is in training with Gary Moore.

Waikiki Waves began his National Hunt career in bumpers, where he was placed on both occasions, before finishing in the winners enclosure on his hurdling debut in testing conditions.  It was evident he would prefer the better ground and with this under his feet at Fontwell Park he won over hurdles in first time blinkers in 2018.

Trainer Gary Moore always maintained there was more to come from this little horse and he was eager to send him chasing after his encouraging schooling at home. Waikiki Waves made it a winning start to his chasing career at Lingfield Park before going onto win another 3 times in one season over fences! He began his 2019-20 season with yet another win at Fontwell Park in October and followed this up with some respectable performances when stepped up in class.

During the 2020-21 season Waikiki Waves has raced 6 times for his lovely Owners and has finished in the prize money during every single start. He won his 6th race over fences in style at Leicester (retaining his 100% strike rate at this track) and finished 2nd behind the attractive Eaglehill.

This season Waikiki Waves has had things mixed up for him a bit with races over fences and hurdles and it was great to see a switch back to hurdles worked a treat as he landed his 8th career win at Lingfield Park on 20th December. He followed this up with a couple of disappointing runs but a return to Fontwell Park and fences saw the horse relish a more prominent ride, jumping his fences beautifully and going onto finish 3rd behind two smart horses. He is likely to have one more race this season before enjoying a holiday and returning to action in October! 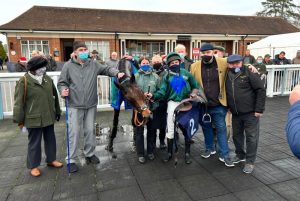 A gallant victory from horse and rider, December 2021 ...
Read More 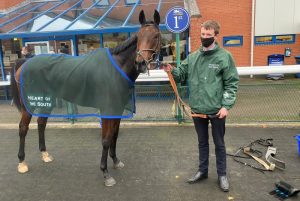 Another chase win to lift our spirits, November 2020 ...
Read More 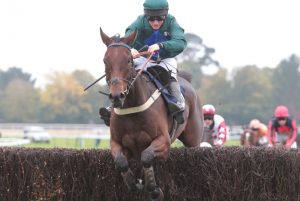 Another win for Waikiki Waves over fences, Oct 2019 ...
Read More 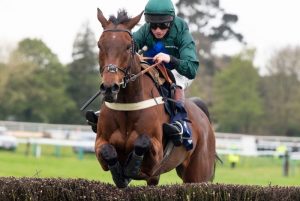 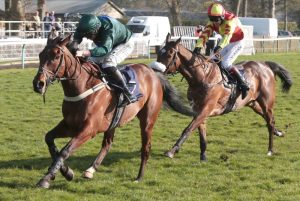 Another triumph for the little legend! 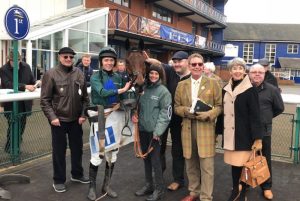 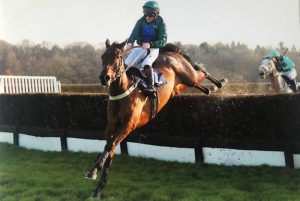 A winning start over fences for Waikiki Waves

Brilliant round of jumping to land another win, Jan 2019 ...
Read More 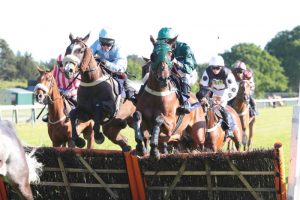 Hopefully the first of many for this horse over hurdles, May 2018 ...
Read More

Alexandros was a high class miler at the ages of 3-5 and his most notable success was the Group 3 Al Rashidiya in Dubai to win by 3 lengths under Frankie Dettori. He went onto finish a close 2nd in the Investec Diomand Stakes (Group 3) and was placed in a Group 1 in Germany.

As a sire his first crop were in 2015 and he has produced several stakes performers, and winners both on the flat and over hurdles. The Grandsire Kingmambo has a 54% winners to runners strike rate with National Hunt offspring, his most well known being Cheltenham Festival Grade 1 Triumph Hurdle winner Detroit City.

The Dam was unraced, but was bred to be a stayer by top-class middle distance stalllion Milan. After winning on debut over 7f, Milan went onto win the Group 2 Great Voltigeur Stakes over 1m4f at York before winning the Group 1 1m6f St Leger Stakes a month later for Aiden O’Brien.

Milan has a 44% strike rate with National Hunt offspring and is responsible for Grade 1 Doom Bar Hurdle winner Jezki and 4-time winner Double Shuffle who is frequently placed in Graded company.

AIGUILLETTE enjoying a birthday leg stretch this morning🥳 🏇🏽 He has the latest official birth date out of all of our horses in training & therefore took a little while to come into himself. However his race record is one of our most consistent with a win, 8 seconds & 2 thirds👏🏼 pic.twitter.com/m8Fm…

Fantastic to see two of our ex-racers thriving at the @windsorhorse this week. IMPERIAL RUBY was 1st & Reserve Champion Flat ROR whilst recently retired TRAFALGAR BOY in only his 2nd show was the youngest in his class & did superbly (his future looks bright!) Well done boys🏆 pic.twitter.com/ahKd…

In search of softer ground CILAOS GLACÉ has headed up to @PerthRacecourse He travelled brilliantly & seems to be in great order. Booty is a horse that needs a little luck so🤞🏼 it’s on his side today & we can see him race well before he enjoys a break. Good luck & safe return 💙 pic.twitter.com/DpkR…

RUBY YEATS has returned to Sussex with her breeder Sue ready to embark on the journey of motherhood as she’s in foal to PLANTEUR!🤰Thanks to @ChapelStud for looking after her. Ruby will spend the summer out in the paddocks & hopefully her pregnancy continues to go smoothly! pic.twitter.com/Magg…

Brilliant to see AIGUILLETTE back in the winners enclosure at @LingfieldPark today to finish 2nd🥈He was unlucky to come up against one but flew home under @Aidankeeley25 & is sure to be winning soon. Thanks to Lingfield for letting us watch the replay with a glass of bubbles🥂 pic.twitter.com/IlmI…

C&D winner AIGUILLETTE returns to @LingfieldPark this evening for their opener. Apprentice @Aidankeeley25 takes the ride & we hope to see the horse come on from his seasonal debut. Good luck to connections & groom Bilal & safe return to all 🤞🏼💙 pic.twitter.com/3gUe…