In a matter of years years, Marco Botti quickly established himself as one of Britain’s leading trainers with a reputation for fielding high-class challengers in the world’s biggest races while retaining an admirable strike-rate with his runners at home, where he has been champion all-weather trainer.

A horse that we will always hold very dearly to our hearts as she became a sprinting sensation with Marco throughout the 2016 – 2018 seasons. This daughter of Raven’s Pass was purchased at the Tattersalls Yearling Book 1 Sales for 38,000 Guineas and won impressively as she made all on just her third start.

2017 saw her achieve back-to-back wins and land her first bit of Black Type when finishing 3rd in a Listed race at Pontefract. The dream for her Owners was very much still alive heading into her 4-year old campaign which saw Raven’s Lady demolish the boys when winning at Kempton Park in April before she was placed in a Listed race at Haydock. She continued to improve and was given two fantastic rides from Gerald Mosse which saw her land the Group 3 William Hill Stakes at York on 13th July and the Group 2 Goldene Peitsche in Germany on 26th August! What a horse!

She was sold privately in December 2018 for 325,000 to race in America. We miss her hugely but continue to follow her with great interest!

Marco was bred to succeed in racing. His father Alduino has been champion trainer in Italy for more than 30 years, while Marco’s brother Stefano is also a leading trainer in Italy. In addition to learning at home with his family, Marco also spent time working for leading trainers Luca Cumani, Ed Dunlop and Saeed Bin Suroor before embarking on his own training career.

State of the art premises

In early 2013, Marco and his wife Lucie, a former jockey and key member of the team, moved into their brand new custom-built stable, Prestige Place, while also retaining their previous premises, Green Ridge Stables, in order to accommodate their burgeoning string of racehorses. The new state of the art yard houses 100 horses and includes facilities such as a treadmill, equine swimming pool & spa,undercover ride and horsewalkers. Based in the heart of the town, Prestige Place is poised to take full advantage of the 50 miles of turf gallops and 19 miles of all-weather tracks, which receive first-class attention from the team at Jockey Club Estates

For such a big operation, Marco and his team make owners of Heart of the South feel very welcome indeed.  Marco or his assistant trainer Karen always accompany us on the gallops and are happy to answer owners’ questions. It’s a real pleasure to have horses with them.

For more information on Marco Botti please see his website.

Want Your Own Horse? 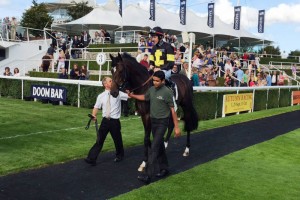 Group or sole owner, we find the right horse and trainer for you—leaving you all the fun!
END_OF_DOCUMENT_TOKEN_TO_BE_REPLACED