Legal Rights is a very consistent 5-year old who raced 10 times in Germany and France before joining the HOTSR string, and he finished out of the Winners Enclosure on just 2 occasions! His 3 wins were eye-catching on soft ground which saw the horse battle very gamely, sticking his neck out for each victory over 1m2f-4f. He was recommended to Gary and HOTSR and ticks a lot of boxes.

On arrival at Cisswood Stables Legal Rights transformed physically hugely and after two hurdle runs under his belt Gary decided to give the horse some time, geld him and put him away for the summer to mature – and it really was the best thing for Legal Rights!

This season has been his best and after two encouraging races on the flat it didn’t take long before a return to hurdles meant Legal Rights was on a roll with his winning ways! He relishes the softer ground conditions and did just that when winning for the first time over hurdles at Fontwell Park on Boxing Day and then at Hereford under Niall Houlihan on 4th January. He wasn’t quite 100% coming out of his subsequent race at Huntingdon, but after some time to freshen up he returned to Fontwell Park on 27th February and showed class as he won the Class 4 contest under Josh Moore well.

The drying out ground soon arrived come March and we just about got away with it at Plumpton when stepped up to 3m Legal Rights gave his all despite not enjoying the ground to finish 2nd. With the sunshine now here to stay Legal Rights will enjoy a break before returning to racing action from October. He deserves a break after 9 races and we can’t wait to see him back next season. 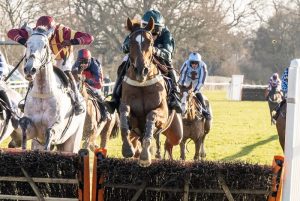 A 3rd win over hurdles this season for Legal Rights

Another victory over hurdles for this horse, February 2022 ...
Read More 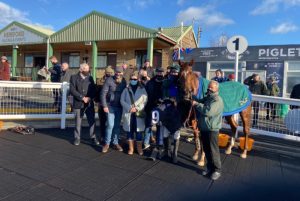 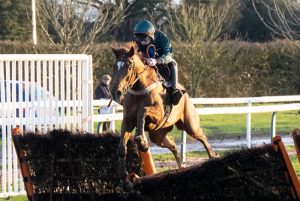 Legal Rights wins for the first time over hurdles

Hopefully the first win of many in our colours, December 2021 ...
Read More

Hunter’s Light was a fantastic racehorse over 9-11f and after winning his first race at the age of 3, his successful career took him all over the globe! He won numerous Stakes races including 3 Group 1’s and was rated 119.

Hunter’s Light is a young son of the sensational Dubawi and from the same family as Darshann and Too Darn Hot. He has already proved he can produce decent types, being the sire of high class Group winner Irska and two particularly impressive French Novice Hurdlers. He retired to stud duties aged 7 and his stock share his head-down attitude to racing (something Legal Rights does too!)

Lutindi won on her racecourse debut over a mile before being stepped up in trip to 10 furlongs and being placed twice, including a Listed race. She has produced 3 foals of racing age Legal Rights, Larry Lobster (3yo) who has raced 4 times and was placed twice, and 9furlong winner Lubiane.

Her Sire Adleflug was top class over 12 furlongs winning a Listed race and the Group 1 Deutsches Derby in Germany as a 3yo before winning a Group 1 in Germany at the age of 4 and being placed in 3 Group 1 races. He went onto become the leading sire of 3yo’s in Europe.

⚠️WARNING⚠️ Handsome new boy in town 😍 Our newest recruit in training with @OliverSherwood 🏇🏽 By the NH Stallion responsible for Cheltenham Festival winners Mister Whitaker, Willoughby Court & City Island 🤩 5% shares available in this exciting 3yo 📞Contact us for details! pic.twitter.com/tmtq…

We couldn’t let #racingstaffweek pass without giving a thank you to Harry who does a bit of everything - working on the yard, taking our horses racing, capturing photos/videos for us & helping with the gallops. He also has the ability to shout “loose one” & be heard a mile away🤣 pic.twitter.com/GWh6…

Lisa at @gl_racing always gives bit extra to her horses! She kept Walk In The Wild entertained with salt licks/tasty treats when he endured a quiet spell & got Spirit D’Aunou’s coat GLEAMING when he arrived from France. She is very much loved by all horses/humans!#RacingStaffWeek pic.twitter.com/oUJG…

CILAOS GLACÉ is a horse with plenty of ability but he also comes with minor issues!However Stefan at @OliverSherwood does a fantastic job with him, working hard to keep Cilaos settled, knowing when he’s having an off day etc & his influence is huge with this boy! #RacingStaffWeek pic.twitter.com/pqw0…